There’s nothing like our beautiful city during the Christmas time, with the sparkling lights turned on making everything feel more cozy, it really is a memorable time of the year. We’ve listed when the lights will turn on in some of the capital’s biggest shopping destinations including Oxford Street, Regent Street, Covent Garden, Leicester Square and many more.

Starting off with one of the busiest streets during Christmas, Regent Street has 45 twinkling spirits above the street covered in hundreds of thousands of LED lights. Known as ‘The Spirits of Christmas’, the lights display is the largest of its kind in the country and definitely one of the most beautiful.

The 5000 dangling stars are back this year and are focusing on sustainability by reducing operating hours and LED lights combining to use two-thirds less energy than last year. Stroll the busy streets which will probably be filled with tourists and enjoy the sparkling sky as well as your favourite high street stores. Carnaby Street are known for their Christmas installations, the theme this year is ‘expect the unexpected’, features include neon lyrics from Queen’s Bohemian Rhapsody, glittering Rolling Stones tongues, fan favourites such as oversized robins, a giant snowman, colourful palm trees from Carnaby Carnival as well as underwater scenes from the unforgettable Under The Sea. 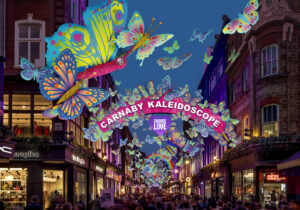 The famous Covent Garden Christmas Decorations will be twinkling daily from 7am until 11pm. The iconic 60ft-tall Christmas tree will take over the Piazza and is certainly a sight to see, as well as their giant mirrored baubles and mistletoe which are back inside the market building too! 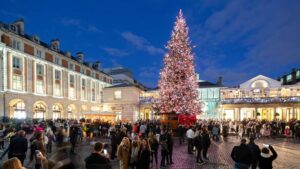 Every year, since 1947, the people of Norway have given the people of London a Christmas tree. This gift is in gratitude for Britain’s support for Norway during World War II. Over 20 metres high and 50 to 60 years old. It is selected from the forests surrounding Oslo with great care several months, even years, in advance. The Norwegian foresters who look after it describe it fondly as ‘the queen of the forest’. Being one of the world’s most famous Christmas tree, you want want to miss it being lit up! 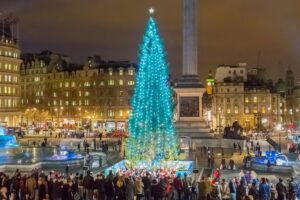 Christmas at Leicester Square includes an annual Christmas market filled with festive lights, many eating and drinking options and entertainment curated by Underbelly. Enjoy hot drinks as you walk around the square decked out in sparkling lights and filled with little wooden chalets, all waiting to be explored. 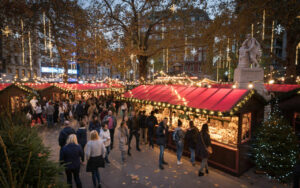 Enjoy the Bond street illuminations featuring more than 90,000 LED lights, last year the street lit up with lights in the shape of white peacock feathers, a homage to men in the late 18th century known as ‘peacocks’ for deliberately strutting along the street in their extravagant clothing. 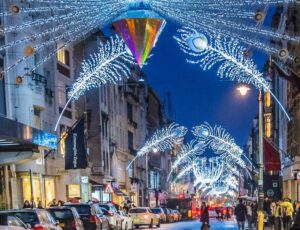