From sublime Michelin starred restaurants to more casual dining restaurants the London food scene is simply never ending and neither are the new openings. As equally enchanting as all these new restaurants may be we have chosen the top new places for you to visit, giving you a good insight and then handing over the power for you to test them out. Each has something unique to offer so gird your tastebuds for Septembers best new openings. 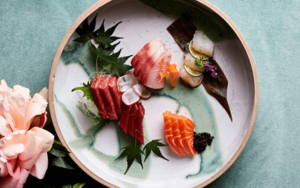 The development of the former US embassy presents a brand new modern Japanese restaurant located on 38 Grosvenor Street, opening on the 21st September.

The two-storey space will have two distinct areas, upstairs is ‘Midori’ with the designs reflecting the Japanese zen gardens, with an abundance of green leather, iridescent shell walls and a stylish centre marble sushi bar. Downstairs, the space ‘Magma’ has its own theme representing an active volcano with its black timber, burnt orange leather and terracotta sculpture wall.

The food which is based on a ‘Japanese pub’ will be a high-end dining experience located in the Mayfair scene. This is where the ingredients have a story to tell and a restaurant that is so rich in history honouring Japanese traditions which binds communities together. The menu is tapas style and features dishes such as Lobster tempura sushi roll with chargrilled red pepper & creamy yuzu lemon Hojicha-smoked lamb marinated with spicy kuromame miso, hispi cabbage grilled with homemade koji dressing or even wagyu ishiyaki with yakiniku sauce served on a sizzling hot stone. Sounds so divine! 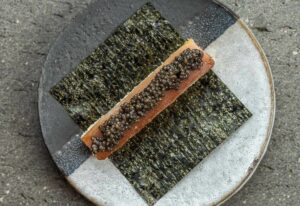 This new omakase restaurant brings more flavoursome fun and fine dining to Chiltern Street in Marylebone. Their menu will be sourced from local and Japanese suppliers with sakes, rare spirits, fine wines and niche beers alongside. Whilst their menu has not yet been released expect nothing less than the spectacular food served in Mayha in Beirut, their sister restaurant.

The restaurant which is spread out over two floors has a stylish dining space with a custom light installation and a curved stone counter below. The wrought iron staircase leading downstairs will take you to the raw bar and courtyard, the perfect spot for pre and post-dinner drinks. Make sure you keep your eyes peeled for there menu as they are expected to open shortly at the end of the month. 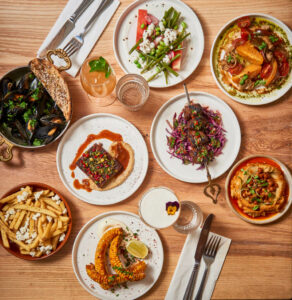 Brother Marcus which was only first established a few years ago in 2016 has since become a major success with restaurants already located in Angel, Borough Yards and Spitalfield. Without a doubt Brother Marcus is moving onwards and upwards, getting ready to open their fourth restaurant – this time in Kensington.

If you’re familiar with them, you will already be aware of how popular their weekend brunch is. The speciality is Eastern Mediterranean dishes open from breakfast/brunch through to dinner. In the evening try the delicious variety of dips and pita followed by the amazing mezze plates. New dishes on the menu in Kensington will include: Feta and ricotta borek with grilled spring onions and greek yogurt, crispy calamari with garlic and saffron aioli and the half chicken with lemon dressing and nigella seeds. To end on a high, you must try their new homemade donut with date and tahini cream topped with chocolate and pistachio pasteli. Drawing this restaurant apart from the the others it will also be the first to include a deli counter too. From that, they’ll be serving pistachio and cinnamon swirls, almond croissants, tahini blondies, chocolate babka, baklava and more to take away. 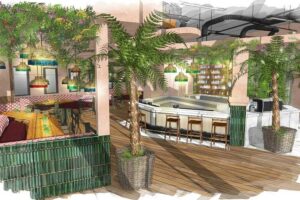 This is one we are really excited for, opening on the 29th September. The Incipio Group, who is behind the much-loved Pergola and The Prince, is well renowned for making spaces instgrammable and rather beautiful and rest assured this space will be so to. The venue will take inspiration from Cuba and Miami’s iconic 1930’s clubhouses where upstairs will be a hangout space with a daiquiri bar.

This social setting has space for 400 guests across two floors perfect for hosting large parties and corporate events, with multiple private hire and group feasting options for the festive season. For more intimate celebrations the two private dining spaces and sharing menu options will be available. Best try the tropical bold cocktails and test out the exotic interior to see the Miami flair and party vibes.

The tallest sky scrapper in E14 has now just become home to M Canary Warf a high end grill restaurant since the 5th September. Rare’s restaurants include other M sites in Victoria Street and Threadneedle Street, as well as the Gaucho chain however this restaurant rather stands out as a more glamourous restaurant serving the highest quality products.

Picture yourself walking on to a fancy yacht in Nice or sipping a cocktail in the best beach club in Saint-Tropez… well the grand, glitzy and glamourous big money interiors is definitely giving off the same vibes here.  The space is made up of a dining room with stunning views of the River Thames and London’s skyline, private dining rooms, an exclusive members club and a cocktail bar. The restaurant is open for breakfast, lunch and dinner where the menu’s got a very heavy influence of Provençal cuisine on it. The steak has to be a big contender of the best meat dish on the menu, with the most impressive cut coming in the form of a £150 Kobe Grade 10+/A5 fillet.

Most importantly, we must take note of how ethical and sustainable this restaurant truly is. The beef is 100 per cent carbon neutral, like all of Rare’s 22 restaurants. The restaurant is also working in partnership with Crate to Plate whereby some of the restaurant’s herbs, leaves and baby vegetables will be grown in a London-based urban farm which uses a soil-less method to cultivate its crops, cutting down on space and water usage compared to traditional method. The restaurant is also in partnership with an organisation called Not For Sale, which works globally to support victims of modern slavery and human trafficking, and prevent people from getting swept up in it. If you are keen to support a fantastic initiative and try some delicious food its best you come and check the place out for yourself. 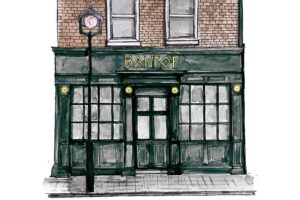 This restaurant, cocktail bar and art space has just opened this week in Soho and where else best to place a trendy new spot. Whilst this little hotspot may be rather small it is certainly large in style with the art space, the curved bar area, mirrored walls, dazzling gold bar, forestry filled toilets and  secluded terrace.

Chef Asimakis Chaniotis of Michelin-starred Pied à Terre is taking charge if the menu so rest assured they have the skills to create spectacular dishes. The menu offering at Bantof will feature sharing plates, tasting plates and desert platters made from seasonal ingredients. Expect dishes such as black truffle pizza or the spinach and lemon risotto. Jack Scotti’s SuperNacular cocktail menu will also include a series of drinks entitled ‘Soho Stories’. This innovative dreamy menu will aim to match both the cocktails and the art. Each cocktail will also be named after a prominent Soho landmark or personality, which will be revealed throughout the year as part of Bantof’s events. Sound rather intriguing! 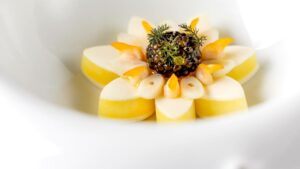 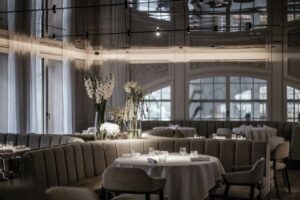 Alex Dilling, from the former two Michelin star Greenhouse restaurant, has found his new home at Hotel Café royal from the start of this month and we have to say it looks insane. If you are looking for fine dining or you are trying to impress a foodie, then this is one of London’s swankiest spots.

Overlooking Regent Street, the space is welcome to just 34 diners. The dining room is rather elegant and intimate with subtle neutral-coloured booths, hand painted silk panelling and soft features creating a harmonious atmosphere. Nothing should distract from the food here as it is quite literally artwork in itself.

The menus include from the Connoisseurs tasting menu worth £195pp, featuring amazing dishes such as the Aged Kaluga Caviar and the Veal Sweetbread, the signature tasting menu and the three-course set lunch menu. Sink your teeth into the delicious menus, as this isn’t just a meal it is a spectacular gastronomic experience.